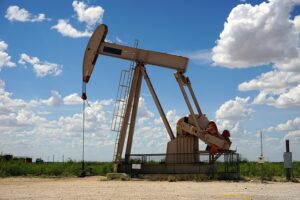 The pumpjack is an indispensable part of the the oil industry and one that oil pros and layman alike have probably seen working away many times on a well.

Pumpjacks are classified as artificial lift system and are used in oil wells that don’t have enough pressure for oil to naturally rise to the surface. They’re often also used to lift water out of gas wells to improve gas inflow. (a.k.a. “waterjerkers”).

It’s estimated that as many as 96% of oil wells in the US require a pumpjack for this reason at the beginning of production and that most will require one at some point during their life.

Here are 5 interesting questions about the oil pumpjack:

Who invented the pumpjack?

The modern oil pumpjack was invented by Walter Trout in 1952 while working for the Lufkin Foundry and Machine Company.

The design goes back to ancient Chinese irrigation systems which used a similar travelling and standing ball arrangement in shallow bamboo piped, human powered treadle-style systems. Before the pumpjack, oil extraction wasn’t nearly as efficient or even possible when there wasn’t enough natural pressure available. With its invention, extraction became more automated and much more efficient with yields increasing dramatically.

Over time, the pumpjack has seen a number of technological advancements and even today, manufacturers continue to improve the design. Newer models last longer, use less energy and are more resilient to wear, corrosion, pump failure and other problems.

The pumpjack market today is still very robust with research suggesting a compounded annual growth rate of close to 5% expected until the year 2023 with the North America market of Canada, United States and Mexico leading the way due to expected increasing oil and gas production.

How are pumpjacks powered?

Pumpjacks are typically gas or electricity powered. Energy usage is dependent on how modern and efficient the pumpjack is and its capacity.

Larger pumpjacks can remove up to 5 barrels of oil per minute from the ground but it depends on a number of factors including the number of strokes per minute, the amount of fluid in the pump bore, the percentage of oil in the extracted liquid and the size of the pumpjack itself.

How much power does a pumpjack use?

How efficient are modern pumpjacks in terms of the energy they use to operate? Let’s take a look at how it compares to a rival system, the Gas Lift system.

A steam-assisted gravity drainage (SAGD) operator may use a less efficient Gas Lift system. A more modern LiftPlus system uses 65% less gas and further, only produces an emulsion of oil and water. Offered early savings over a Gas Lift system could be upwards of $87,000 annually (Source: LiftPlus).

Using a single LiftPlus system can reduce emissions to a degree that would be the equivalent of removing 121 cars off the road.

A pumpjack helps to extract oil from the ground when there is insufficient bottom-hole pressure for the oil to make its way to the surface of the ground on its own.

Not only does the pumpjack improve the efficiency of oil extraction, it also helps to extract oil that would otherwise be unreachable.

The modern pumpjack also reduces labor costs since they can be remotely monitored, requiring less staff. This is particularly helpful for low-producing oil wells to ensure that labor and other costs don’t exceed oil supply levels.

How does an oil pumpjack work?

Please check out the short video below for visual illustration of how an oil pumpjack works and the various part.

OilPro stocks pumpjacks for your needs

If you need a pumpjack solution, OilPro can help.

Visit our pumpjack page to learn more. You can also call us directly at 403 215 3373 or contact us by email at [email protected] for more details.