How Does A Pumpjack Work? (Answered) 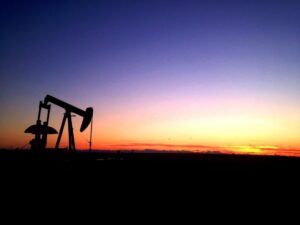 A pumpjack is used to physically extract oil from the ground when the pressure in the well isn’t high enough to force the oil to the surface. Pumpjacks are particularly useful in both new and partially depleted oil wells as we’ll discover below.

While the modern pumpjack was invented in 1952, it remains an important part of the oil industry with up to 96% of oil wells requiring one at some point during their lifespan.

You may hear this process of oil extraction referred to as artificial lift as it involves pulling or extracting the oil from the ground with a bit of help.

You may also hear a pumpjack referred to as a jack pump, beam pump, donkey pump and more.

So there are a few synonyms and meanings for both the process and the equipment used when it comes to artificially removing oil from the ground with a pumpjack.

A pumpjack operates somewhat similar to the old style manual water wells you might have seen on a farm or in an old movie. Pumpjacks are generally either powered by natural gas for remote installations or by electricity. They are very durable and can last for decades.

A pumpjack is made of a visible section which is seen above ground and a long series of rods called sucker rods which dip deep into the ground to access the oil. A pump at the bottom of the well moves the oil upwards to the surface of the earth.

Modern pumpjacks such as the LiftPlus system from OilPro only have two moveable parts downhole, helping to extend the lifespan even more.

Larger pumpjacks can remove up to 5 barrels of oil per minute from the ground but it depends on a number of factors including the number of strokes per minute, the amount of fluid in the pump bore, the percentage of oil in the extracted liquid and the size of the pumpjack itself.

That’s a very simplistic explanation but the video below offers a visual depiction of how pumpjacks work.

When can a pumpjack be used in the life of an oil well?

A pumpjack can be used in a new wells as well as late-in-life-wells and as shown above, almost all wells will require use of a pumpjack at one point or another.

How prevalent are pumpjacks to this day? According to Rigzone:

“In the US, the majority of wells, 82%, employ a beam pump. Ten percent use gas lift, 4% use electric submersible pumps, and 2% use hydraulic pumps.” (Rigzone.com)

The great thing about pumpjacks is that when maintained properly, they can last a very long time. Newer models are more energy efficient, resilient and last longer than ever before too.

Plus, not only does the pumpjack improve the efficiency of oil extraction, it also helps to extract oil that would otherwise be unreachable. While older equipment was only able to extract about 25% – 50% of a well’s reserves, with a pumpjack virtually all the well’s reserves can be pumped.

Our article 5 Interesting Questions-About Pumpjacks Answered sheds more light on pumpjacks and a second article Why Is There A Pumpjack Shortage discusses the shortage and what you can do about it. 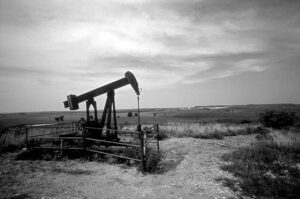 What OilPro offers those shopping for a pumpjack

Call us directly at 403 215 3373 or email us at [email protected] to find out which option makes sense for you and to learn about our current inventory.