How common are fires in outdoor oil storage tanks? 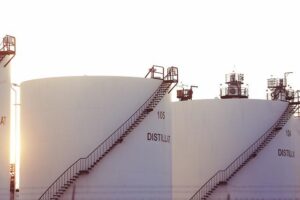 How common are oil tank fires and why have they decreased during this period?

The National Fire Protection Association (NFPA) reports the following in a report from 2014:

“In 2007-2011, U.S. fire departments responded to an estimated annual average of 301 fires at outside storage tanks. These fires caused an annual average of 1 civilian injury and $3 million in direct property damage.”

How has oil tank fire prevalence changed over the years?

Since 1980 when the time period of the complete report began, oil tank fires have dropped significantly.

The question is, why have fires significantly dropped from a total of 1,142 oil tank fires in 1980 to 275 in 2011, a reduction of 76%? Before we can answer this question, we need to look at what causes these fires in the first place.

The report shows that major causes of outdoor oil tank fires are as follows:

Lightning strikes: 34% of oil tank fires are caused by lighting strikes during storms. Static discharge is a related concern. Considered an “act of God” there is little you can do to prevent these from happening but read on as the other major causes are ones tank owners can prevent.

Outside rubbish fire: Garbage fires were responsible for 19% of oil tank fires. Clearly these are preventable.

Heating equipment: Caused 13% of oil tank fires with the most common items being shop tools and industrial equipment (23%) and torch, burner or soldering iron. Clearly these are also preventable.

While the major cause of oil tank fires (lightning) is one that tank owners can’t prevent, other major causes listed are preventable and the method(s) by which you extinguish the fire is also a choice.

Why have oil tank fires decreased so drastically since 1980?

Firstly, there are still major oil tank fires that do occur around the world at any given time, one recent example being here.

The two traditional ways to handle an oil tank fire have always been to let the fire burn out or use fire fighting foam to extinguish it.

A better understanding of how to handle and extinguish oil tank fires has a lot to do with this success.

A major project called FOAMSPEX was undertaken to learn more about how to approach and deal with large oil tank fires and put them out quickly.

Earlier reports on oil tank fires include the LASTFIRE project (large diameter tanks), the Technica project (studied the effects of various factors on fires like wind, tank diameter and size, etc) and the API report (suppression of fires in large aboveground storage tanks).

All of these projects helped to educate oil tank owners on how to prepare for and deal with oil tank fires. In the past, owners were largely left up to their own devices and had to do their own research using fire magazines, reports on actual oil tank fires and later on, Internet research among others.

You can access a detailed article on oil tank fire research here.

So now that we’ve shared our thoughts regarding the prevalence and cause of oil tank fires, how can we most effectively deal with them and extinguish them automatically and as quickly as possible?

Let’s take a closer look at how OilPro can help you effectively deal with oil tank fires using the latest effective technology, the XTT tank tool.

The XTT Tool works off the simple idea that it remains in the Flash Zone. It is a constant moving object that stays with your tank level. Once an oil tank fire needs to be extinguished, the foam enters the Freedom Tool a few inches above the liquid, releasing the fire foam and placing it in the correct spot.

Firefighters want this foam directly on this area which allows the fire foam do its job and separate flame from fuel.

Key bullet points for the XTT tank tool are as follows:

The oil tank fire research report referenced above states that while an oil tank fire can only be extinguished with foam, historically foam systems have had difficulty with larger tank over 20 m in diameter.

Because of where it sits, in the flash zone of the tank, the XTT can extinguish tank fires in a matter of seconds. This can be done automatically and unmanned. We install an infrared camera to look at tanks for fire. If lightning, static, mechanical or terrorist act starts a fire, the camera detects this.

The self-stored fire foam is on site and is released in the tank covering the surface area rapidly. The foam enters the tank internally and is placed in the correct spot a few inches above the oil, extinguishing the fire.

Fires can be extinguished as quickly as 15-20 seconds after detection which is less than the time you’d need to call the fire department.

Contact OilPro directly at 403-215-3373 or by email at [email protected] to learn more about the benefits of the XTT tool, or visit www.xttcanada.com